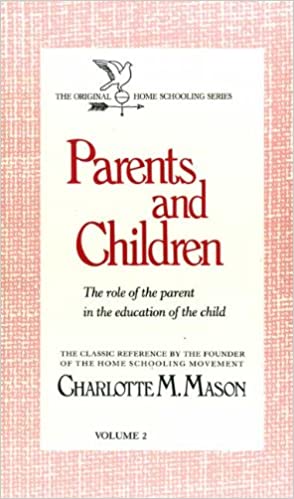 As I had the opportunity to read Parents and Children, Mason’s second volume of her Educational Series, I was reminded of ideas and practices that we seek to live out daily in our classrooms and campus. They are becoming better ways to respond to weakness–our own, and our students’, better means to take advantage of the opportunities that we have to learn together, better goals for helping a child understand why.

Instead of sharing a lot of my own ideas and words in this entry, I am going to invite you to read and reflect on Charlotte Mason’s own ideas with a number of excerpts and quotes that caught my attention in this reading. Some are also from other wise people whose words and life Mason went to for inspiration and principles.

Each of these quotes could be the basis of an entire blog entry, easily. Each of them represents a page–some even a chapter or more–of Mason’s ideas on how to help children and adults grow in specific ways. Each invites us to consider our own role in a child’s life.

I encourage you, dear reader, to set aside a few minutes to read these slowly and to reflect on how it depicts the reality of your life. Coming back to these on several occasions would be an even richer experience. And, of course, reading the whole book would be the best!

I have grouped each set of quotes and ideas somewhat arbitrarily under ‘Idea’ headings. Use those as is helpful to understand Charlotte’s ideas in their context with each other.

Idea of a High View of the Child

Idea of Relationship with the Living God

Idea of the Role of Parents in a Child’s Education

Idea of Centrality of Character and Discipline to Education

Idea of the Use and Limitations of Reason

I trust that you will find ideas that encourage, convict, and compel in Charlotte Mason’s writing. Time after time, I am amazed how relevant her words are nearly a century after her death. I imagine that is because she was rooted in the reality of the experience of the Church, Christ’s body on earth, as well as the experiences of the many wise–albeit imperfect–people who have gone on before us. Such writers’ words are a welcome relief from the myopic voices of our own day.

They are truly, as C.S. Lewis once described, “the clean sea breeze of the centuries blowing through our minds.”